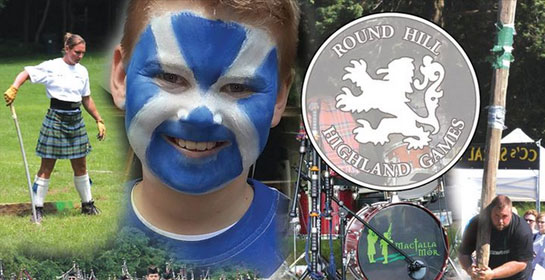 The games offer family fun and festivities for Scots and Scots-At-Heart.

The Games are open to the public, and are held rain or shine. Tickets are $20 for adults ticket and $15 for children. Also military and vets with ID and their families are free. Kids enter for free if they are wearing a kilt and carrying a toy sword or dressed as Merida from the Disney movie “Brave.” All proceeds are collected by the Round Hill organization for benevolence and to preserve Scottish heritage, and to support the Alzheimer’s Association, Connecticut Chapter.

The Round Hill Highland Games are the third oldest games of its type in the United States. Since 2016, the games have been held at Lime Rock Park. The original location was at the estate of Charles A. Moore on Round Hill Road in Greenwich, CT. At that time, they were held on the fourth of July for the estate workers who were mostly Scottish Americans. Since its beginning in 1923, the event has grown in popularity and today, is one of the most anticipated Scottish Highland Games held in the Northeast. Participants and visitors come from all over the country to enjoy the food, fun and festivities.

Experience Scottish heritage through clans, heavy athletes, bands, pipers, drummers and drum majors, and so much more, including:

I only saw Bob Frink once, and from that moment wished that I had known him longer. I met him at the Canaan Country Club last August where he was hosting the 3rd Annual Ice Bucket Open Golf Tournament to raise money  for the  ALS Association, Connecticut Chapter.

Bob sat in a motorized wheelchair. He could no longer speak, but he could smile, and I think smiling is about the bravest thing you can do when you have ALS.

ALS stands for Amyotrophic Lateral Sclerosis or, more commonly, Lou Gehrig’s disease. It is a progressive neurodegenerative disorder which means it robs the sufferer of muscular control starting with mobility and manual dexterity and eventually speech and the ability to breath. There is no cure, and it is always fatal. It stole those things from Bob, but it couldn’t rob his spirit, or the spirit of his wife Jeanine and their family. Much is asked of a family when a member has ALS.

Bob had served as greens keeper at CCC for 27 years, so a golf tournament at the Club was a natural for a fundraiser.  Well known and well loved, Bob’s friends organized the Open to raise money to help him out, but Bob decided the proceeds would go to ALS Association CT, the organization that has helped him and his family.

Bob passed away in February, but the Ice Bucket Challenge continues. It will be held this Saturday, August 10th, for the fourth year, at the Canaan Country Club in memory of Bob Frink.

The tournament has raised over $70,000 for ALS research over its three year run.